Have you ever had an UNEXPECTED SETBACK that left you reeling?

My family had a cabin in Silver Lake, CA for 85 years. It’s where my dad learned to walk. It’s where I learned to walk! It was full of board games and old knick-knacks and soft linens. It was a peaceful place I simply adored. Due to its age, it was powered by gas and not winterized, so my family only visited in the summer.

Four years ago, when it was time for all of us to yet again get together and open the cabin for the season, everyone was there – my father, my stepmother, my brother and his son – except me. This would be one of the few years I would miss opening the cabin, but I had previously committed to a fun staycation with my husband and stepchildren and we spent the day on the San Francisco Bay.

That night, when we were headed back to our hotel, I got the call that shook me to my core. The cabin at Silver Lake had BLOWN UP. See, when my family arrived that day and went about the usual things to get the cabin ready, my dad noticed something odd when he went to light the stove. There was a rumbling below and a big puff of fire came up from the stove. Luckily, after that incident, my family thought best to pause the annual opening and getaway until they could have the rumbling looked at by a professional. So they spent a few minutes closing the place back down, and made plans to get someone to come up and look at the pipes the next week. On their way down the mountain, just minutes later, they passed a firetruck. They knew something was off… so they turned around and followed it. Back at the site of the cabin, they saw what remained of our family treasure, which had been reduced to rubble.

When I got the news, I was in complete shock. Yet as I stood there, I quickly went from MOURNING the loss of the cabin to GRATITUDE that my family was alive. The cabin itself was no longer my focus. The fact my entire family could have been lost in mere minutes but DIDN’T was nothing short of a miracle.

I went from “I can’t believe this!” to NOW WHAT?

What about you? Is there any area of your life about to BLOW UP? Perhaps it already has.  You’re finally filing for the divorce you know is right. Your boss just broke the news that they’re letting you go. Or perhaps there’s a new opportunity in your life you just can’t ignore anymore. Maybe you, too, are asking NOW WHAT?

I want you to know that your UNEXPECTED SETBACKS can lead NEW BEGINNINGS.

Here are 3 steps to get started:

After the explosion, my family and I knew Silver Lake would never be the same. But I realized that it would be NEW. It would have new memories. New knick-knacks. And a new generation to enjoy it, as well as many more generations to come hopefully.

I took the job of overseeing the construction of the new cabin. Everyone had an opinion on the matter, and it became frustrating. I knew that in order to succeed I had to DECIDE MY MINDSET.

When you begin to REBUILD from a SETBACK, you may get input from many places and many people. But what really matters is what YOU want.

What will your MINDSET be? Will you focus on the LOSS or the GAIN? The NEGATIVE or the POSITIVE? The WHAT IF or the WHAT NOW?

My mother always used to say: “It is what it is.” I say – Don’t leave it there! The KEY is to go one step further. To say NOW WHAT?

Think about the place you’re in RIGHT NOW, then make sure your MINDSET will take you FORWARD.

It’s important to remember that there is a GAP between “It is what it is” and the NOW WHAT? I call it the MIDDLE ZONE. Before you move forward, you must decide which door to open, which WAY to go forward.

In the ReLaunch program, I like to remind participants of this simple phrase: KNOW WHAT YOU MUST KNOW. In building a house from the ground up, I had to learn a lot. And this is how I did it: ONE STEP AT A TIME.

Whether it’s a new job, a new relationship, the kids going off to college, or any other RESTART. don’t look at the overwhelming task ahead of you. Look at what you MUST KNOW to get to the NEXT STEP.

I didn’t know how to build a house, so I asked for help. You can, too. ASK the experienced. Then – take it ONE STEP AT A TIME. This way, you won’t be STUCK in the MIDDLE ZONE.

The truth is, you will have UNEXPECTED SETBACKS in your life. But there’s ALWAYS a SILVER LINING.

The KEY through each change is to STAY POSITIVE.

For me, that means adding a little SILLY to balance the SERIOUS. The day we lost the cabin, we arrived back at the hotel and walked into our room. I was still in a daze from the news. It was a strange layout with a big, sunken tub smack in the middle. My stepson knew I was upset, so he asked if I’d like to take a bath. And you know what? I did! My stepson and I got into this bathtub in the middle of our hotel room, fully clothed, and we LAUGHED – not even two hours after something important to me BLEW UP. My husband thought we’d lost it. But in that moment, I knew my family and I would REBUILD – new memories would happen in that treasured space.

It’s time to ask NOW WHAT, to KNOW what you need to take that FIRST STEP. Then take it. It’s waiting as well as the possibilities for you! 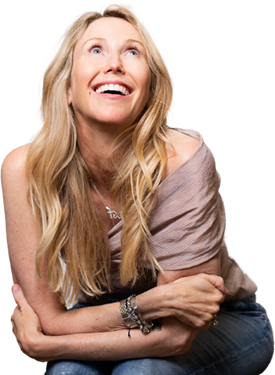